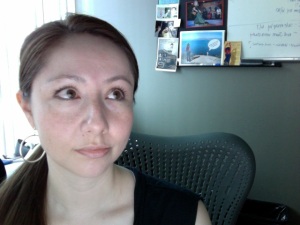 It’s 11:05 p.m. and I decided to write a new post instead of going to bed where I belong. I’m having a hard time getting myself on schedule like I had planned. In fact, just before this, I got up off the couch at 10:15 because I suddenly wanted to practice bulerias in front of the TV. I can’t help it — late night is when I get my burst of energy and creativity.

Friday night I saw a flamenco show at a nearby restaurant and the dancer was amazing. She was also much younger than me and has been dancing since she was just a little thing. Every time I see a show, I leave with the same feelings: joy, inspiration, excitement, motivation … with a sprinkling of frustratiion, regret, defeat. I hate that I started this at 34 1/2 and not 4 1/2 or at least in my 20s. I have so much catching up to do.

I seem to remember my mom many years ago telling me I should look into flamenco, but I didn’t really know what it was. Actually, I don’t think she really understood what it was, either. I think she was thinking of classical Spanish dance — which is beautiful, but not really my thing. Had I seen a flamenco show when I was a teenager, I’d have traded my Doc Martens for Gallardos in a heartbeat. It would have been a fantastic outlet for my teen angst. I imagine I’d have been pretty awesome by now if I had started out back then …

Or maybe not. Maybe I’d have been sidetracked by high school then college and parties and stupid boys. Ugh, stupid boys! Maybe I needed to get past those things before I could commit fully to the dance. Yes. I’m going with that theory. I truly do believe that you find who or what is right for you at just the right moment in your life. And when I think about how things have played out up to now, I couldn’t have found the dance at a better time.