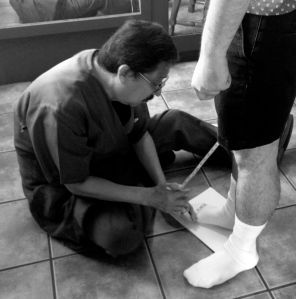 With the Albuquerque trip just a few weeks away, I was scrambling to find a pair of flamenco boots for my brother and partner-in-flamenco-crime, Nick. Over the last month or so, I’ve learned it’s pretty easy to find inexpensive beginner shoes for women, but for men, not so much. I ordered him a pair of Gladis boots from flamencoshoes.com on Catalina Island (Elena there is super nice, by the way) but unfortunately they were too narrow. My next thought was Flamenco West in Playa del Rey. They have Senovillas — which are gorgeous and fantastic and all that, but they’re also professional quality and very expensive and unnecessary for a beginner. If anybody is getting $300 shoes, it’s gonna be ME, thank you very much.

Now, Nick has never, ever done flamenco and hasn’t danced at all since 8th grade cotillion. But he’s adventurous and a good sport, and figured that while at the flamenco fest, he may as well do as the flamencos do. So for shits and giggles he enrolled in the Beginner Flamenco Intensive workshop, which is 2.5 hours per day for 6 days straight. From what I heard from students who took it last year, even though it’s a beginner class, it’s no joke. And a lot of people who take it have some experience. I wanted Nick to go in feeling confident and I knew regular dress shoes or his Doc Marten’s weren’t gonna cut it if he were to have any hope of keeping up.

I’d heard about Duran’s Shoes, but had never been there or seen their work. But I figured they were our only chance of getting Nick a decent pair of boots, so we went down to their place in Boyle Heights today. They don’t have flamenco boots in stock, but they did have folklorico boots to try, which are very similar. Nick said they felt great, but were just a tad too big and not as ankle-hugging as the flamenco variety would be. So they measured him and promised to have his custom flamenco boots (at $170 out the door) ready by June 1.

I tried on a pair of lovely black suede shoes and I have to say, they felt good and looked great. They hugged my feet nicely and felt sturdy. They definitely felt better than my Don Flamencos. I think if I’d had a pair of Duran’s when I started five years ago, I probably wouldn’t have felt the need to move on to Gallardos so quickly.

Anyway, mission accomplished. Nick is excited. We may just have another flamenco in the family. I already told him I’m gonna be pissed if it turns out HE is the dance prodigy. Wouldn’t that just be my luck? 😉

I've been studying flamenco dance since 2008 and I like to blog about it :-) View all posts by Marissa